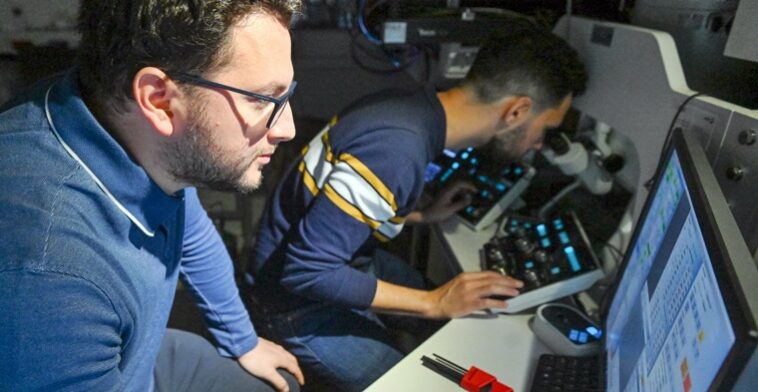 Researchers from the Andrew and Erna Viterbi Faculty of Electrical and Computer Engineering at the Technion – Israel Institute of Technology have presented the first experimental observation of Cherenkov radiation confined in two dimensions. The results surprised the researchers when a new record in electron-radiation coupling strength was achieved, and the quantum properties of the radiation were revealed.

Cherenkov radiation is a unique physical phenomenon, which for many years has been used in medical imaging, and in particle detection applications, as well as in laser-driven electron accelerators. The breakthrough achieved by the Technion researchers links this phenomenon to future photonic quantum computing applications and free-electron quantum light sources.

The study, which was published in Physical Review X, was headed by PhD students Yuval Adiv and Shai Tsesses from the Technion, together with Hao Hu from the Nanyang Technological University in Singapore (today professor at Nanjing university in China). It was supervised by Prof. Ido Kaminer and Prof. Guy Bartal of the Technion, in collaboration with colleagues from China: Prof. Hongsheng Chen, and Prof. Xiao Lin from Zhejiang University.

The interaction of free electrons with light underlies a plethora of known radiation phenomena and has led to numerous applications in science and industry.

One of the most important of these interaction effects is the Cherenkov radiation – electromagnetic radiation emitted when a charged particle, such as an electron, travels through a medium at a speed greater than the phase velocity of light in that specific medium. It is the optical equivalent of a supersonic boom, which occurs, for example, when a jet travels faster than the speed of sound.

Consequently, Cherenkov radiation is sometimes called an “optical shock wave”. The phenomenon was discovered in 1934. In 1958, the scientists who discovered it were awarded the Nobel Prize in Physics.

Since then, during more than 80 years of research, the investigation of Cherenkov radiation led to the development of a wealth of applications, most of them for particle identification detectors and medical imaging. However, despite the intense preoccupation with the phenomenon, the bulk of theoretical research and all experimental demonstrations concerned Cherenkov radiation in the three-dimensional space and based its description on classical electromagnetism.

Now, the Technion researchers present the first experimental observation of 2D Cherenkov radiation, demonstrating that in the two-dimensional space, radiation behaves in a completely different manner – for the first time, the quantum description of light is essential to explain the experiment results.

The researchers engineered a special multilayer structure enabling interaction between free electrons and light waves traveling along a surface. The smart engineering of the structure allowed for a first measurement of 2D Cherenkov radiation.

The low dimensionality of the effect permitted a glimpse into the quantum nature of the process of radiation emission from free electrons: a count of the number of photons (quantum particles of light) emitted from a single electron and indirect evidence of the entanglement of the electrons with the light waves they emit. In this context, “entanglement” means “correlation” between the properties of the electron and those of the light emitted, such that measuring one provides information about the other. It is worth noting that the 2022 Nobel Prize in Physics was awarded for the performance of a series of experiments demonstrating the effects of quantum entanglement (in systems different to those demonstrated in the present research).

According to Yuval Adiv: “The result of the study which surprised us the most concerns the efficiency of electron radiation emission in the experiment: whereas the most advanced experiments that preceded the present one achieved a regime in which approximately only one electron out of one hundred emitted radiation, here, we succeeded in achieving an interaction regime in which every electron emitted radiation. In other words, we were able to demonstrate an improvement of over two orders of magnitude in the interaction efficiency (also called the “coupling strength”). This result helps advance modern developments of efficient electron-driven radiation sources.”

Prof. Kaminer commented: “Radiation emitted from electrons is an “old” phenomenon that has been researched for over a hundred years and was assimilated into technology a long time ago, an example being the home microwave oven.

The experiment is part of a paradigm shift in the way we understand this radiation, and more broadly, the relationship between electrons and the radiation they emit. For example, we now understand that free electrons can become entangled with the photons they emit. It is both surprising and exciting to see signs of this phenomenon in the experiment.”

According to Shai Tsesses, “In Yuval Adiv’s new experiment we forced the electrons to travel in proximity to a photonic-plasmonic surface that I planned based on a technique developed in the lab of Prof. Guy Bartal.

The electron velocity was accurately set to obtain a large coupling strength, greater than that obtained in normal situations, where coupling is to radiation in three-dimensions. At the heart of the process, we observe the spontaneous quantum nature of radiation emission, obtained in discrete packets of energy called photons. In this way, the experiment sheds new light on the quantum nature of photons.”