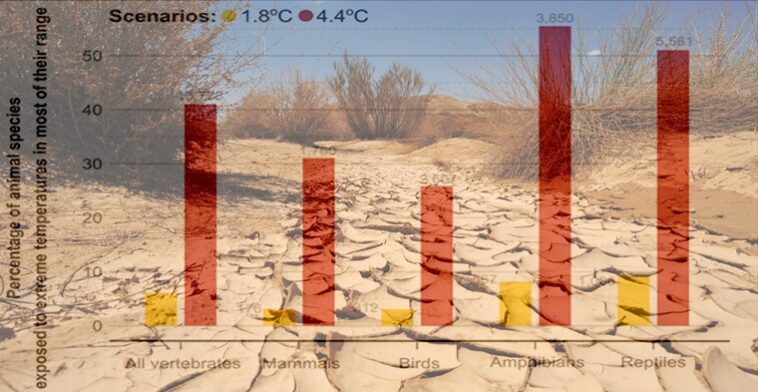 We live in the age of a climate crisis. As a result, extreme weather events such as heatwaves are becoming more common, longer, and more intense.

For example, in 2022, heat waves reached unprecedented levels, breaking records across many countries and as many as 15,000 people died.

Such heatwaves (or extreme thermal events) also have dire effects on wildlife. Most animals are adapted to live in a specific temperature range, and prolonged exposure to extreme heat has already caused mass deaths in many animal species.

Nevertheless, no one has examined how future extreme thermal events, which are projected to increase and intensify, will affect animals globally until now.

In a new paper in the journal Nature, a group of researchers led by Dr. Gopal Murali (from the Ben-Gurion University of the Negev, Israel; currently at the University of Arizona, USA) tried to tackle this problem.

They used species data for most land-vertebrate species (33,548 species of amphibians, birds, mammals, and reptiles) regarding recent exposure to maximum temperatures, to predict the effects of future extreme temperatures by the end of the 21st century.

They found that while thousands of species are likely to be exposed to future heatwaves, the number of exposed species is much higher under high-emissions scenarios when compared to a scenario that reduces our dependence on fossil fuels.

Dr Murali remarked, “By 2099, under the highest greenhouse gas emission scenario, we estimate two in five species of all land vertebrates will experience extreme thermal events with temperatures beyond their historical levels in at least half their distribution range.”.

He added “We also found that by 2099 in this scenario, 3,773 species, or 11% of total land vertebrates are likely to face extreme thermal events during most of the year.

“However, a low-future emissions scenario greatly reduces animals’ exposure to heat extremes. In this scenario, just 6.1% of all land vertebrates will have most of their ranges exposed to extreme heat events, and none during most of the year.”

Prof. Shai Meiri (from Tel-Aviv University, coauthor of the paper) added, “As with other efforts to map human threats across all land vertebrates, we show that amphibians and reptiles are much more at risk. This is probably due to their overall smaller distribution ranges – which in our case may prevent them from escaping to regions within their distribution not exposed to extreme temperatures”.

He added, “Interestingly, and as opposed to previous notions, the climate crisis – as manifested by extreme temperature events – is likely to also greatly affect species in the drier regions of the world including deserts, shrublands, and grasslands across North America, Africa, and Australia”.

Dr. Takuya Iwamura (from the University of Geneva, another co-author of the paper) stressed “Our results based on daily temperature prediction show that substantial greenhouse gas emissions cuts will still enable us to minimize the effects of global warming on species survival.

Following the Paris Agreement’s goal of limiting average global warming to 1.5oC by the end of the century will greatly prevent thousands of species from being exposed to dangerous levels of extreme heat conditions”.

Prof. Uri Roll (from Ben-Gurion University, coauthor of the paper) delineates the important implications of this study for biodiversity conservation,

“We need to start considering the impacts of extreme heat events when making conservation and land management decisions.

The biodiversity crisis is upon us and many species may go extinct due to various human actions. If unchecked, climate change may soon become a final nail in their coffin. The time to act is now.”