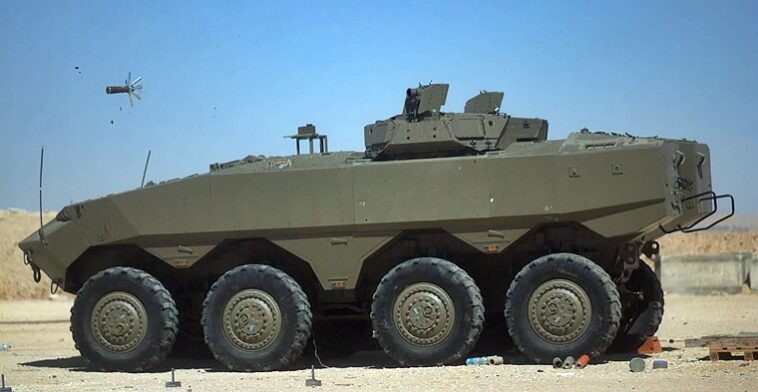 The Iron Fist Active Protection System (APS) is a defense system designed to protect military vehicles, such as tanks and armored personnel carriers, from incoming missiles and rocket-propelled grenades (RPGs).

It uses a combination of radar and other sensors to detect incoming threats and then deploys a countermeasure, such as an explosive charge or a deflector, to intercept and neutralize the threat.

The Iron Fist APS was developed by the Israeli, and it has been installed on a variety of military vehicles, including the Merkava tank and the Namer armored personnel carrier.

Watch: The “Iron Fist” Active Protection System (APS) completes a series of successful interception tests, the next step in completing its development process for the Eitan APC and D9 bulldozer

The Ministry of Defense Tank and APC Directorate, the IDF Ground Forces, and the Elbit Systems Land Division jointly announced the completion of a successful series of “Iron Fist” Active Protection System tests.

The “Iron Fist” system developed by Elbit Systems is an advanced active protection system that provides 360-degree coverage against multi-range threats in open and urban environments. In addition to its defensive capabilities, the ”Iron Fist” provides APC teams with fire source location to close the fire circle in multi-threat combat arenas.

The system includes an electro-optic sensor suit, searching and tracking radar, and a reaction suit with launchers and interceptors, neutralizing threats at a safe distance from the APC.