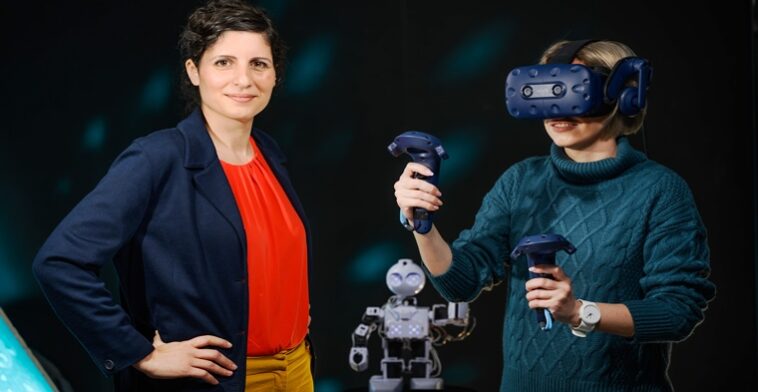 In an era of social distancing and quarantine, Israeli researchers suggest a mixed methods strategy for remote cognitive training via virtual reality and interactive robot.

Israeli researchers argue in a new paper that previous tests of virtual reality versus social robots for cognitive training compare apples to apples when they really need to be comparing apples to oranges.

“Until now, most studies compared a physical robot to a virtual reality robot, so it was no surprise that the participants overwhelmingly favored the physical robot. However, to truly assess their effectiveness, a socially adaptive robot needs to be compared to immersive virtual reality,” explains lead researcher Prof. Shelly Levy-Tzedek.

Their findings were published recently in the peer-reviewed International Journal of Human-Computer Studies.

While the need for remote cognitive training preceded the coronavirus pandemic, it has assumed added importance as people, particularly older adults, become more homebound and warier of visiting medical premises. Cognitive training slows the decline of executive cognitive functions in the aging brain.

Prof. Levy-Tzedek and her student Orit Cohavi pitted an immersive virtual reality experience against a socially assistive robot (SAR). She and her team wanted to test whether participants preferred an experience emphasizing spatial presence (VR) or one that stresses social presence (SAR).

They tested both the VR and the robot on 64 adults – 32 older adults, 32 younger adults, half men, and half women.

The VR experience took users through a series of scenes: from a rental apartment to driving down a street to under the ocean to a plane. To pass from one to the next, the participants had to solve a task that appeared in the scene (in a book open on the desk in the apartment or on a billboard that appears during the driving scene).

The robot offered cognitive tasks via LED screens on its belly and in its eyes with participants hitting the space bar to indicate their answers. In between, the robot interacted with the participants by talking to them, dancing, and exercising. via its eyes and belly.

The team found that for a short-term task, the participants overwhelmingly preferred VR (66%). However, over the longer term, participants were split over which they would prefer VR or SAR.

“Our study shows, for the first time, that it might not be just VR or just SAR, but rather a combination of the two that will keep people engaged and coming back for more training,” says Prof. Levy-Tzedek.