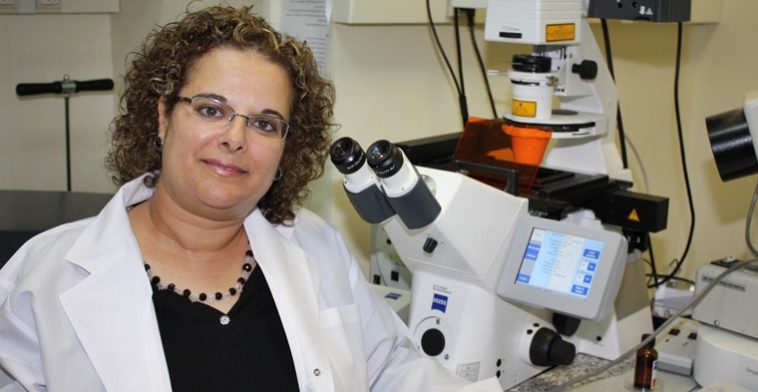 Israeli researchers have revealed a novel treatment approach in the fight against hematologic cancers.

The new method, developed by Prof. Mira Barda-Saad and her research team from the Mina and Everard Goodman Faculty of Life Sciences, involves attacking the cytoskeletal protein, called WASp, which has a unique structural condition in active hematologic cancer cells.

In order to carry out their malignant functions, cancer cells depend on actin, a protein that plays a key role in the cytoskeleton. Malignant cells need actin to be active, proliferate, migrate and invade.

Their research was recently published in the journal Nature Communications.

To date, the involvement of WASp in cancer has not been completely understood, but it is known to be found in cancer cells in a unique “open” structure that allows it to be identified and manipulated. Inducing the degradation of “open” WASp can destroy mainly malignant cells without threatening healthy cells, and can even be used to treat most types of hematologic cancers.

In order to damage the cytoskeleton of the malignant cell, the research team performed screening to identify SMCs (small molecule compounds) that degrade the WASp compound in its “open” structural condition.

To identify the SMCs they used bio convergence technologies, which combine biology with various engineering technologies – in this case, artificial intelligence and machine learning (AI/ML).

By using a device developed by Prof. Yanai Ofran of Bar-Ilan, small molecules were identified in Prof. Barda-Saad’s lab that do, in fact, damage cancer cells without posing too much risk to healthy cells.

The researchers proved the efficacy of using SMCs to inhibit proliferation and destroy the malignant cells in laboratory experiments using cells taken from actual patients, in cooperation with Sheba Hospital, as well as a mouse model carrying human blood cancer.

The WASp protein interacts with another protein, WIP, which binds to a specific point known as the “recognition site” and protects it against degradation. The SMCs binds to the recognition site and prevent the two proteins from binding together, thereby promoting degradation of the WASp, which is no longer protected by WIP.

“The idea arose in my lab when we discovered the process of WASp protection during a study that was published in 2014 in the journal Science Signaling,” relates Prof Barda-Saad. “This primary research led to the development of a new treatment strategy.”

This study, which has been underway since 2015 with funding from the Israel Innovation Authority, may provide a response for types of hematologic cancers for which treatment has not yet been found.

The focused targeting of WASp, which aims to damage the cytoskeleton of the blood cancer cells, could replace treatments such as chemotherapy and other biological therapies which, because of their non-specificity, damage not only cancer cells but other cells in the body, or cause cancer cells to become resistant to treatment.

Previous knowledge of WASp degradation sites, also identified in Prof. Barda-Saad’s lab, enabled researchers to define the various properties of the binding sites and allowed them to predict the types of SMCs that would bind to the interphase between the WASp and WIP proteins, and separate them.

The research team used machine learning to predict the WASp interactions with its environment and identify molecules that would not block the WASp degradation sites.

The moment these molecules were found, the researchers verified their activity through molecular and biochemical experimental work with cell cultures, and later on with a mouse model carrying human malignant tumors.

Prof. Barda-Saad notes that SMCs are already being used for various medical purposes, and they can be administered to patients through the blood system or by ingestion.

One indicator of the safety of this new treatment strategy is the structure of WASp in normal blood cells: it is a “closed” structure, compared with the open structure found in malignant blood cells, which prevents the SMCs from binding to the recognition site.

Therefore, theoretically speaking, using the SMCs does not pose any significant risk. Nonetheless, the concept must understandably undergo pre-clinical and clinical safety trials, as is standard procedure with any drug.

This research focuses primarily on non-Hodgkin’s lymphoma, but since other types of hematologic cancers also express the target protein, which is not expressed in cells that are not blood cells, there is a good chance that this can work for them, as well.

For Prof. Barda-Saad, the development of this new therapeutic strategy is more than just a scientific achievement.

“For many years during my doctoral and post-doctoral studies at the Weizmann Institute, and later on with the NIH in Maryland in the US, I concentrated on basic research.

Several cases of cancer discovered in my family caused me to adopt an applicative approach – how could I take the primary knowledge and use it to develop a therapeutic strategy,” she says.

“The process is lengthy and drawn out because it demands a deep understanding of how cells work and how cancer cells are different from normal cells – what are their weak points that can be exploited? In this research, we used the vast knowledge we acquired in order to design an applicative strategy.”