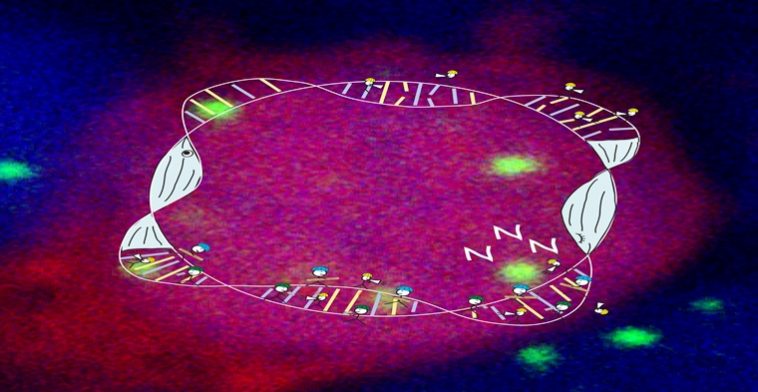 Israeli study reveals that the PARP1 protein acts as an antenna, signaling the brain that it’s time to sleep and repair DNA.

Why do humans spend a third of their lives sleeping?

Why do animals sleep?

Throughout evolution, sleep has remained universal and essential to all organisms with a nervous system, including invertebrates such as flies, worms, and even jellyfish. Why animals sleep despite the continuous threat of predators, and how sleep benefits the brain and single cells remains a mystery.

In a new study published in the journal Molecular Cell on November 18, 2021, researchers from Israel have moved a step forward towards solving this mystery by discovering a mechanism of sleep in zebrafish, with some supporting evidence in mice.

The study was led by Prof. Lior Appelbaum, along with postdoctoral researcher Dr. David Zada.

When we are awake, homeostatic sleep pressure (tiredness) builds up in the body. This pressure increases the longer we stay awake and decreases during sleep, reaching a low after a full and good night’s sleep.

What causes homeostatic pressure to increase to a point that we feel we must go to sleep, and what happens at night that reduces this pressure to such an extent that we are ready to start a new day? During waking hours, DNA damage accumulates in neurons.

This damage can be caused by various elements, including UV light, neuronal activity, radiation, oxidative stress, and enzymatic errors. During sleep and waking hours, repair systems within each cell correct DNA breaks.

However, DNA damage in neurons continues to accumulate during wakefulness, and excessive DNA damage in the brain can reach dangerous levels that must be reduced. The study revealed that a sleep recruit DNA repair system promotes efficient repair so that the day can begin anew.

In a series of experiments, the researchers sought to determine whether the buildup of DNA damage could be the “driver” that triggers homeostatic pressure and the subsequent sleep state. Using irradiation, pharmacology, and optogenetics, they induced DNA damage in zebrafish to examine how it affects their sleep. With their absolute transparency, nocturnal sleep, and a simple brain that is similar to humans, zebrafish are a perfect organism in which to study this phenomenon.

As DNA damage was increased, the need for sleep also increased. The experiment suggested that at some point the accumulation of DNA damage reached a maximum threshold, and increased sleep (homeostatic) pressure to such an extent that the urge to sleep was triggered and the fish went to sleep. The ensuing sleep facilitated DNA repair, which resulted in reduced DNA damage.

How many hours of sleep are sufficient?

After verifying that accumulated DNA damage is the force that drives the sleep process, the researchers were eager to learn whether it’s possible to determine the minimum time zebrafish need to sleep in order to reduce sleep pressure and DNA damage. Since, like humans, zebrafish are sensitive to light interruption, the dark period was gradually decreased during the night. After measuring DNA damage and sleep, it was determined that six hours of sleep per night is sufficient to reduce DNA damage. Astoundingly, after less than six hours of sleep, DNA damage was not adequately reduced, and the zebrafish continued to sleep even during daylight.

PARP1 is an “antenna” that tells it’s time to sleep

What is the mechanism in the brain that tells us we need to sleep in order to facilitate efficient DNA repair? The protein PARP1, which is part of the DNA damage repair system, is one of the first to rapidly respond. PARP1 marks DNA damage sites in cells, and recruits all relevant systems to clear out DNA damage. In accordance with DNA damage, clustering of PARP1 in DNA break sites increases during wakefulness and decreases during sleep.

Through genetic and pharmacological manipulation, the overexpression and knockdown of PARP1 revealed not only that increasing PARP1 promoted sleep, but also increased sleep-dependent repair. Conversely, inhibition of PARP1 blocked the signal for DNA damage repair. As a result, the fish weren’t fully aware that they were tired, didn’t go to sleep, and no DNA damage repair occurred.

To strengthen the findings on zebrafish, the role of PARP1 in regulating sleep was further tested on mice, using EEG, in collaboration with Prof. Yuval Nir from Tel Aviv University. Just like with zebrafish, the inhibition of PARP1 activity reduced the duration and quality of non-rapid eye movement (NREM) sleep.

“PARP1 pathways are capable of signaling the brain that it needs to sleep in order for DNA repair to occur,” says Prof. Appelbaum.

The DNA maintenance process may not be efficient enough during waking hours in neurons, and therefore requires an offline sleep period with reduced input to the brain in order to occur.

These latest findings provide a detailed description of the “chain of events” explaining sleep on the single-cell level. This mechanism may explain the link between sleep disturbances, aging and neurodegenerative disorders, such as Parkinson’s and Alzheimer’s.

Prof. Appelbaum believes that future research will help to apply this sleep function to other animals ranging from lower invertebrates to, eventually, humans.